The initial rally for many shares this week came as hopes of the quick arrival of a vaccine for covid-19 surged. Since yesterday, though, optimism has been tempered by consideration of the time it would take for any vaccine to be available in sufficient quantity to return the daily operations of economies to something like normal. Today’s midweek share roundup takes a look at the four-hour charts of USTEC and TSLA.

Generally positive fundamentals for many defensive and some cyclical shares remain. These include unlimited quantitative easing in the USA, very low or negative rates in most advanced economies and generally good financial results in 2020 so far for most blue chip shares considering the circumstances of a pandemic. Walmart’s earnings per share (EPS) yesterday came in at $1.34 against the consensus expectation for $1.18.

Many large cyclical shares have also remained strong over the last few months. The main earnings report in focus today is NVIDIA Corp after hours. Currently the expectation for NVIDIA’s EPS is $1.92 against $1.46 for the equivalent period last year. 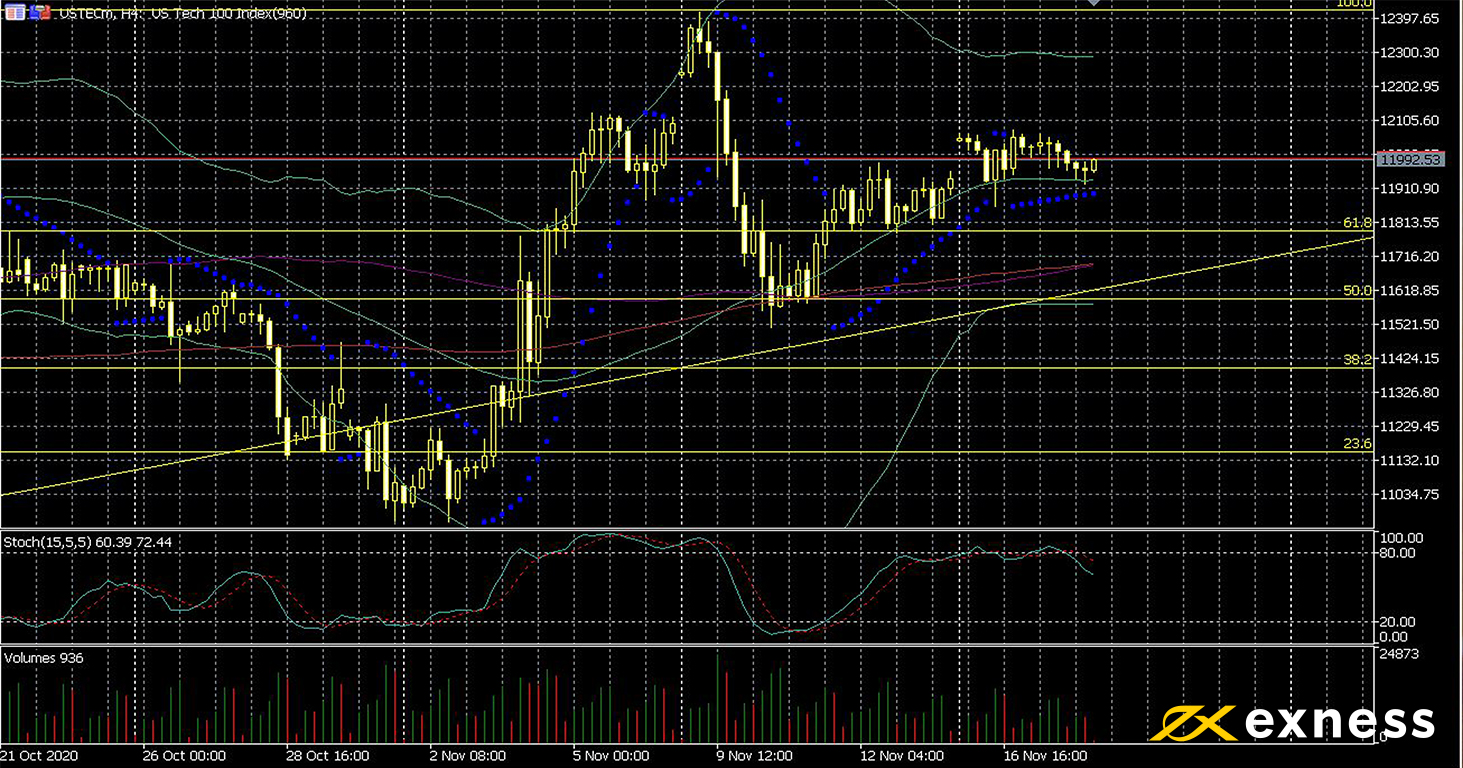 USTEC, the representative CFD based on the Nasdaq 100, has been consolidating since September. Strong gains earlier in the year came as a result of various tech companies’ individual shares recovering very quickly from losses in late February and March to reach a series of new highs over the summer.

Reluctance since then to move higher stems mainly from uncertainty around the American elections earlier this month, especially questions over the smoothness of the transition between Trump and Biden administrations. Expected deadlock of most substantive economic policy in the American Senate and House of Representatives over the next two years should be a positive factor for most shares, but lack of control of covid-19 in the USA over the next two months is a worrying possibility.

From a technical perspective, moving averages have nearly finished reconfiguring into a strong buy signal. The 100 SMA is in the process of golden crossing the 200, with the 50 SMA having moved above both last week. There is also no sign now of overbought from either Bollinger Bands (50, 0, 2) or the slow stochastic (15, 5, 5). In fact, the latter at about 60 is now closer to neutral than overbought. The most important resistance here is the latest all-time high around 12,400 which is marked with the 100% daily Fibonacci retracement area. 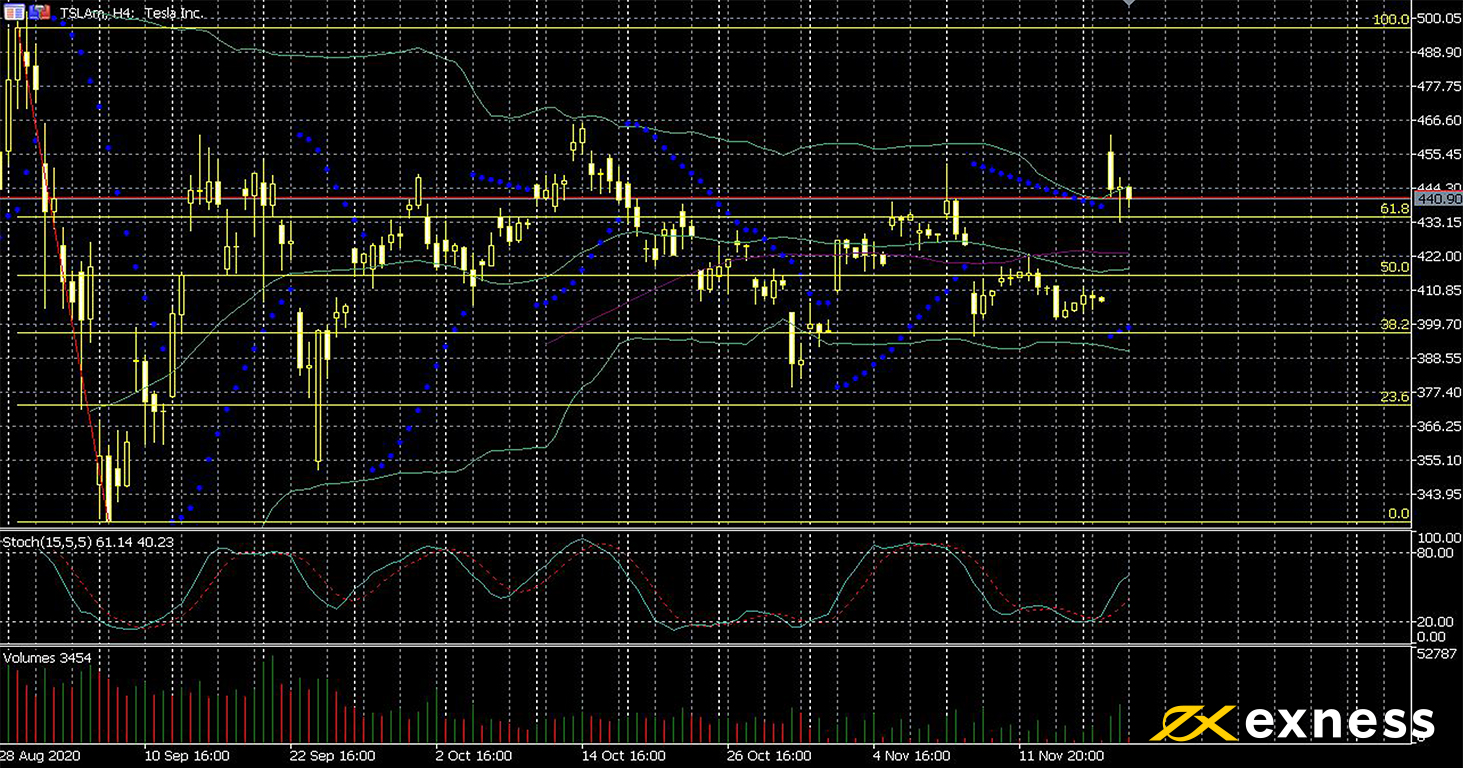 S&P Dow Jones Indices’ announcement that Tesla would be added to the S&P 500 was among the factors behind yesterday’s gain of 8%. While many analysts would argue that this stock is clearly overvalued – the price to earnings multiple was about 875 as of yesterday’s close – sentiment remains very strong on what has become something of a ‘cult share’. Tesla’s selling of environmental regulatory credits to traditional automotive companies continued to secure cash flow, about $400 million in Q3, but the company is still operating at a loss if considered purely on sales of cars.

As with almost any CFD on an individual share, volatility has been high for TSLA over the last few months. However, volume here and particularly buying volume are much higher than most other shares. We can also observe a decrease in volatility since the summer as Bollinger Bands have contracted and a range seems to be establishing itself between roughly the 61.8% and 38.2% Fibonacci retracement areas.

While Tesla’s shareholders can ignore fundamentals much of the time, traders of the CFD don’t have that luxury. Overvaluation often precedes a sharp correction. This of course doesn’t mean that the latest high around $500 won’t be tested again this quarter – it probably will be – but buying in around the current area is unlikely to be suitable except for daytraders.

Thank you for reading Exness Education’s midweek share roundup! Join us again tomorrow for analysis of USDRUB and on Monday for the regular weekly preview. Don’t forget that you can request a symbol to be covered in insights by commenting on Facebook.