Weekly forex data: trade, the BoC and the ECB

Positivity in many financial markets continued today as Chinese exports reached a record monthly high last month. Chinese annual exports as released early this morning jumped over 21% compared to the same month last year with a value of $268 billion, helped by a stronger yuan renminbi. This is a positive signal for recovery in demand around the world. Today’s preview of weekly forex data looks at AUDJPY, GBPCAD and EURZAR.

This week’s main events in monetary policy are the meetings of the Bank of Canada and the European Central Bank. No change in rates is expected but what each says about outlooks for growth is likely to be key for the Canadian dollar and the euro respectively. Thursday’s meeting of the ECB is especially important given the euro’s current strength: the very high rate of euro-dollar, still above $1.21 today, might worry policymakers because of its impact on the cost of European and particularly German exports.

Some of the most important regular data this week include balance of trade from Germany and the UK plus inflation in the USA. Increasing inflation in major economies could drive further demand for commodities, while an increase in Germany’s trade surplus might help the euro to climb further ahead of the ECB’s meeting. Regionally important releases focus on tomorrow morning’s GDP data from South Africa.

There has still been no final agreement on a trade deal between the UK and the EU. With the end of the transition period approaching rapidly, a sudden announcement of a either a breakthrough or collapse of the talks should be considered possible over the next few days. 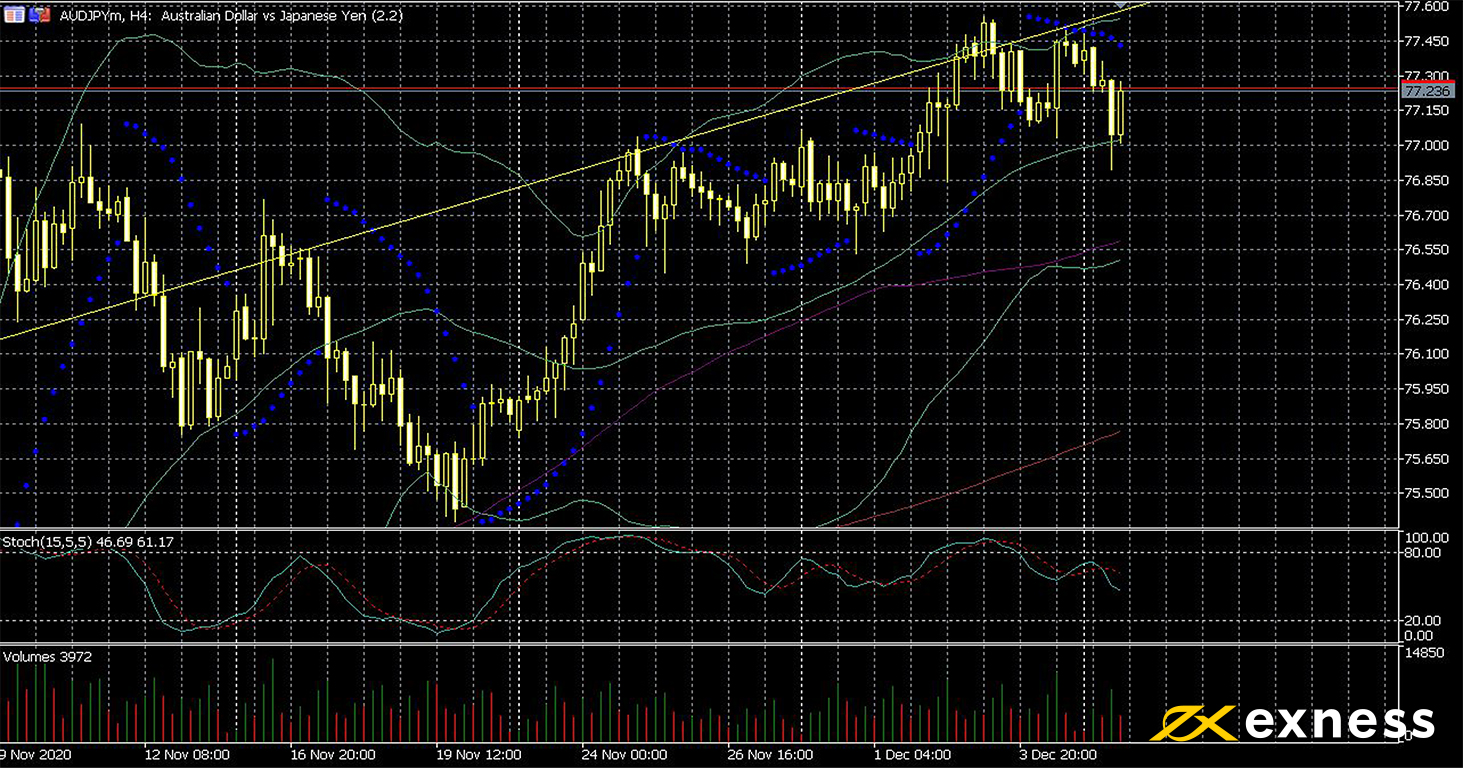 Higher demand from China for Australian raw materials and the general return to ‘risk on’ has supported the Aussie dollar since last week, leading to gains against a number of other currencies. Employment and other data remain weak in Australia, but it’s the same story in more-or-less every other advanced economy. Participants here seem to be discounting recent escalations in the Sino-Australian trade dispute, while the yen as a traditional haven is down amid generally positive sentiment.

AUD retested the 38.2% area of the weekly Fibonacci fan last week without success, but the technical picture nonetheless remains positive. With price holding above the 50 SMA from Bands since late last month and no signs of overbought as of now from either Bollinger Bands (50, 0, 2) or the slow stochastic (15, 5, 5), there seems to be room for more gains if fundamentals align.

NAB business confidence early on Tuesday morning GMT is a key release for AUDJPY, but Westpac consumer confidence (index and change) are probably the most important data from Australia this week. Japanese GDP data just before midnight are unlikely to surprise but might drive short-term volatility for the yen. 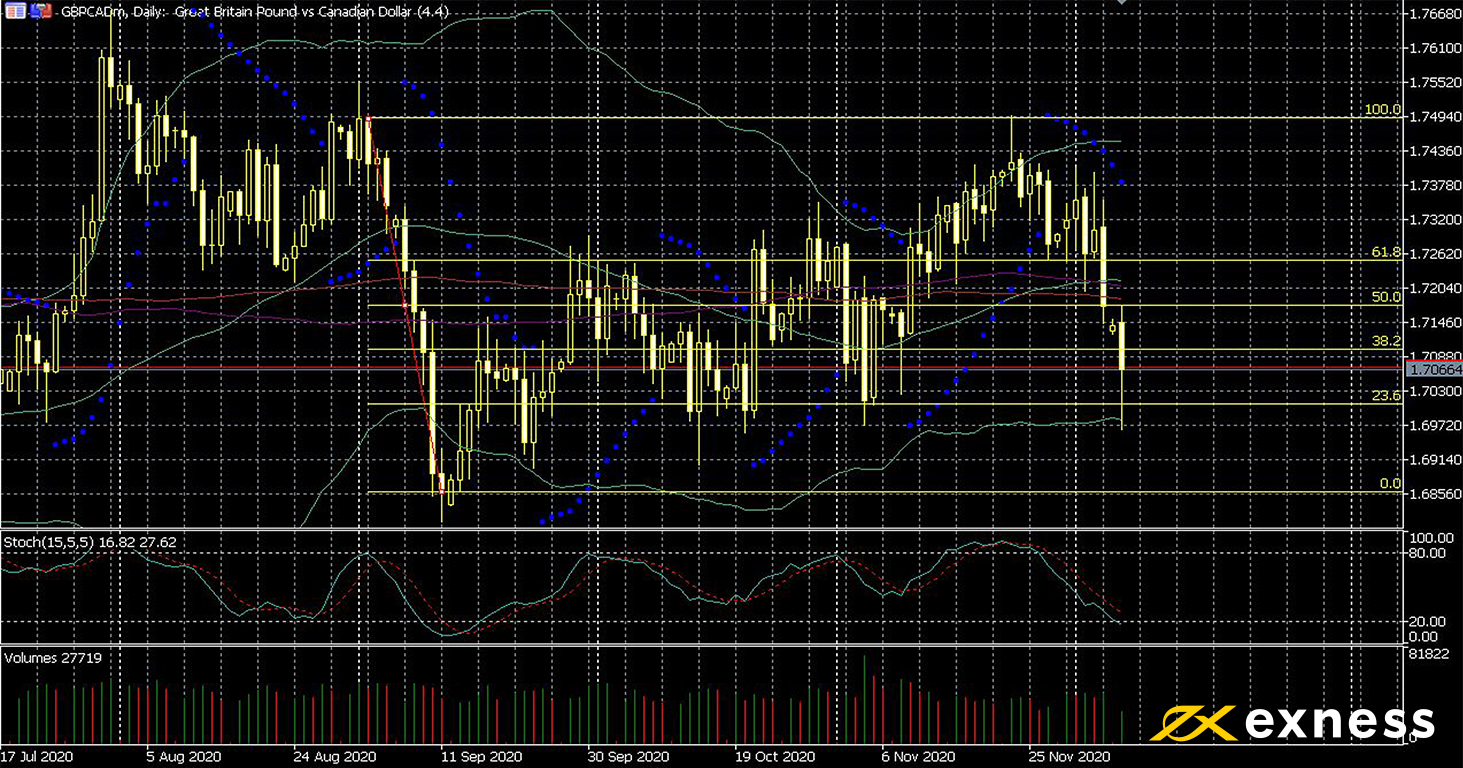 Boris Johnson noted that ‘the pound will go where it will’ when asked whether he worried about a drop of up to 20% in the value of sterling as a result of failure to reach a trade deal. So far this week, it looks like traders are more nervous: positivity around a deal being reached with the EU on trade has evaporated today.

Most pairs with the pound as the base have lost more than 1% compared to Friday’s close: the current two-week low comes as negotiators failed to agree over the weekend on key issues like fishing rights. The loonie meanwhile remains generally strong, buoyed by Brent’s seven-month high just below $50 a barrel reached on Friday.

Pound-loonie is historically one of the less volatile pairs with sterling and 2020 hasn’t really been an exception. The near-term support around the 23.6% daily Fibonacci retracement remains intact today, but bad news from negotiations is likely to lead to a retest of C$1.69. In the context of ongoing Brexit negotiations, oversold from the stochastic can probably be discounted.

Trade talks aren’t the only factor here, though. British balance of trade and the meeting of the BoC this week might have an additional impact on GBPCAD. The main direction here is not at all clear, but short-term opportunities amid liquidity-driven movements on lower timeframes are likely throughout the week. 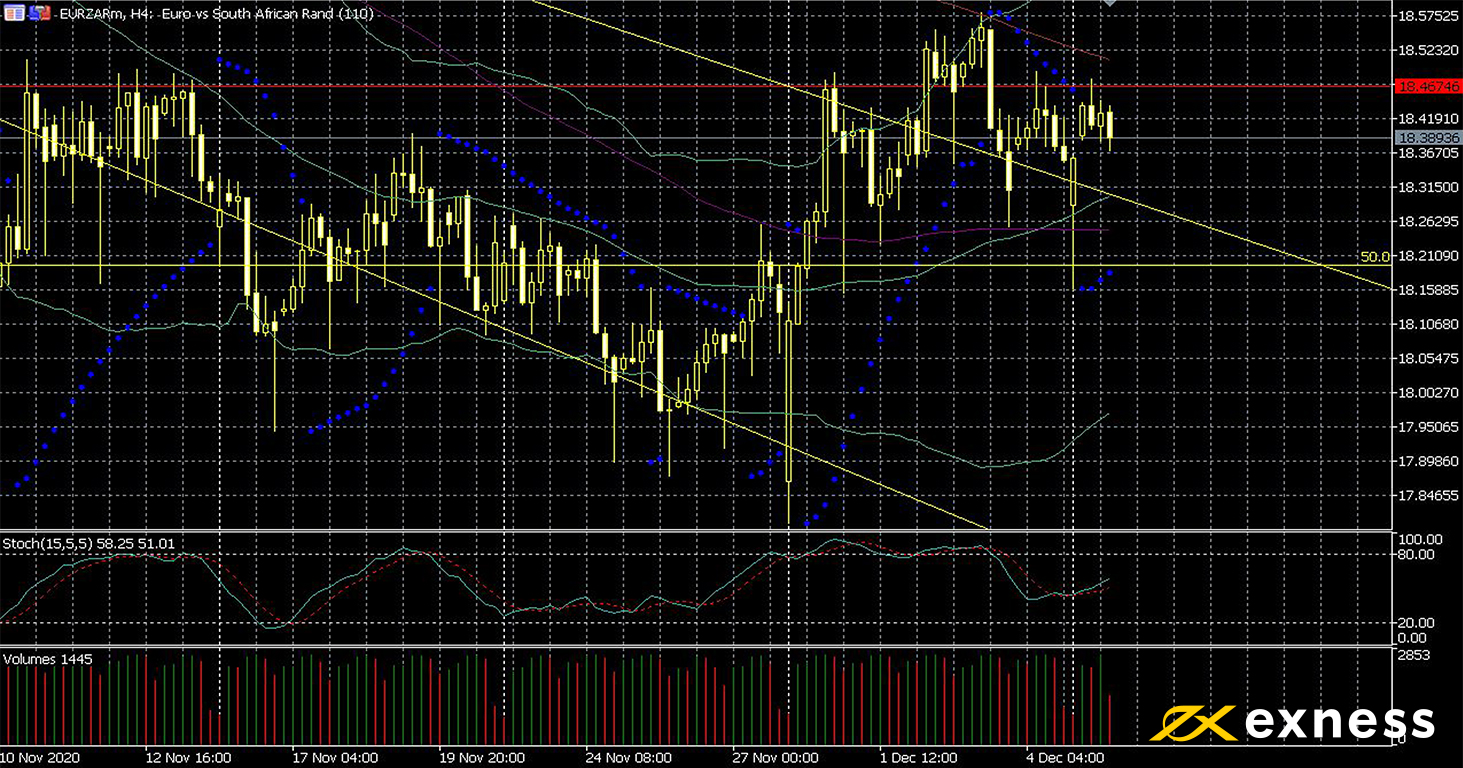 As elsewhere, the euro has made gains against the rand since late last month. The return to ‘risk on’ in many markets has boosted sentiment on ZAR like other emerging currencies, but the fact remains that South Africa is struggling with near-record contraction in its economy and extremely high unemployment.

From a technical point of view, the move back above the 50% weekly Fibonacci retracement area was not very surprising given this zone’s strength as a support. EURZAR had also been oversold or close to it for much of November on the daily chart. A golden cross of the 50 SMA from Bands above the 100 also completed on Friday morning GMT.

In the context of fundamentals, the buy signal from this golden cross should be acted upon only with caution: the ECB’s meeting on Thursday is likely to involve questions about the euro’s strength against the dollar and other majors. While a direct intervention is obviously not likely, any expansion of QE or simply dovish comments might lead to a reestablishment of the downtrend on this chart. Apart from German balance of trade and inflation later in the week, the crucial release tomorrow is South African GDP.

Thank you for reading Exness Education’s preview of weekly forex data! Join us again tomorrow and on Thursday for analysis of NVDA and GBPUSD. Don’t forget that you can request a symbol to be covered in insights by commenting on Facebook.

Confident in your trading skills? Open an account and start trading with Exness
OPEN A DEMO ACCOUNT